During the TechEd 2014 in USA Microsoft revealed another cool offer “RemoteApps” via Public Cloud service. This is similar to Server 2012 R2 RDS Application publishing but only difference is hosted platform is public cloud (Azure). At this stage service is in preview mode and limited to 3 hosted applications only. 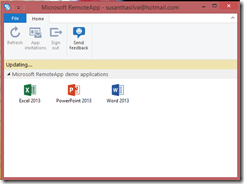 Good news is this offering works across the Android, iOS systems as well. At this stage I only could check on Windows and Android only. Some of the screenshots from my Android tablet,

According to sources OneDrive integration will not work in preview mode. During my test I also found out they have not carried out any integration yet. My understanding is PG team for “RemoteApps” have to work hard on that matter an would be a great challenge for them.

As per the Microsoft motto of “Cloud first and mobile first” this offering match perfectly. After all we expect to work from any device in any location. So there is no better solution than embracing cloud for access availability. To support that future Microsoft making their software readily available from any device concept which I highly believe in for their success.

I’m not sure about other vendors vision but I strongly agree Microsoft will take one of the main initiative to drive Cloud technology to the market and into daily life of people around the world. If you ask why is that? Well Microsoft heavily invest onto Azure and they want to reap out of that. So it’s pretty obvious Microsoft Azure going to be the “de facto” 🙂

Stay tune because this technology has more to offer. So far I only talk about the Cloud-only deployment method only. There is a another “hybrid deployment” model which can integrate with you on-prem network.